Madden went to Lucas Oil Victory Lane for the first time this season and for the 14th in his career, winning the first 30-lap main event of the evening. Madden was in control for most of the race, but a caution with two laps to go allowed a hard-charging Mike Marlar one last chance at the veteran South Carolina racer. Madden pulled away in the green-white-checkered finish to become the 12th different winner this year in the Lucas Oil Late Model Dirt Series. Marlar came home in second followed by Dale McDowell, Brandon Overton, and Earl Pearson Jr.

For the 47-year-old racer it was his 13th career win at Smoky Mountain Speedway, earning him a good starting spot in one of the heat races for Saturday night’s Mountain Moonshine Classic paying $50,000 to win. “Marlar was there, Dale was third and Brandon was up to fourth; I knew those guys would be coming at me. I wasn’t worried about the caution coming out, I was worried about hitting Spencer (Hughes). I don’t know what happened to him I was coming up on him in a hurry and he just stopped in the top lane there and I about hit him.”

“I need to work on my balance a little bit. I am not where I want to be. But I’ve got a good race car right now. I needed to make just a couple of more adjustments tonight, hopefully we can make the right ones tomorrow and we can pick up the big money tomorrow.”

Marlar, who was the fastest qualifier among the 45 entries crossed the line 0.616 seconds behind Madden at the checkers. “Chris is always tough here. He and I have come down to the end a bunch here so hopefully tomorrow night I can get him there. He (Madden) had a little better straightaway traction than I did. I think I could center the corner better than him. I have got to get my straightaway traction better. I had a good car; it was a fun race. I was doing better without that caution. Man, it’s such a tough field here you better have your stuff right.”

McDowell came from sixth to claim the final podium spot in third. “We got a little bit behind in qualifying, so Shane (McDowell) threw some stuff at it and helped it, hopefully we can take notes from tonight. On the long runs we were pretty decent, hopefully we can this thing even better for tomorrow night.”

Owens’ win was more dramatic as the four-time series Champion had to hold off both Jonathan Davenport and super late model rookie Carson Ferguson for the win in the second 30-lapper. Trailing the top three at the finish were Vic Hill and Zack Mitchell.

In Lucas Oil Victory Lane for the 80th time in his career and for the third time this season, Owens led all 30 laps for the victory. “You have to get to the lead and in front of that 49 car, he’s been super tough here lately. Ferguson got up in there and was battling with us, he kind of snuck up on me there. But man, it was some fun racing. I was glad we could get this Ramirez Motorsports home in front tonight. We had a really good hot rod tonight. We’re pretty good at this place. We have had our fair-share of wins and losses here. Our team has had their head down, but we keep digging and digging. We keep getting a little better every week it seems like. Tomorrow’s a different day, we got us a good-starting spot in one of the heat races so we will go from there.”

Davenport finished second in the final rundown of the final 30-lapper of the night. “This is a brand-new car. It’s the first time on the track for it, so we have to learn what it likes. I got really tight right there. That’s normally not what I am here. So, we are definitely going in the right direction. That’s the first time I could even see a leader here in a long time, I am normally not very good here. Congrats to Jimmy on the win and it was fun racing with Ferguson there. He’s going to be pretty good at it, he’s getting better each week and has a bright future ahead of him.”

Ferguson, a cousin to Show-Me 100 winner Chris Ferguson, had his best finish of his career in Lucas Oil Late Model Dirt Series competition. “You grow up watching those two (Owens and Davenport) race, to just be on the same track with them is a privilege and having a good enough car to make me look good behind the wheel.” 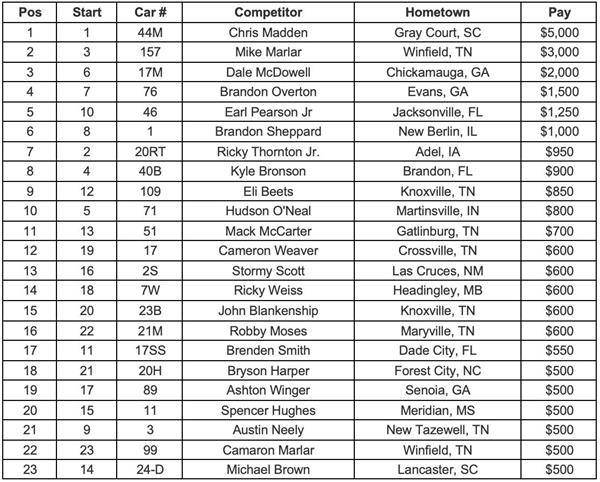 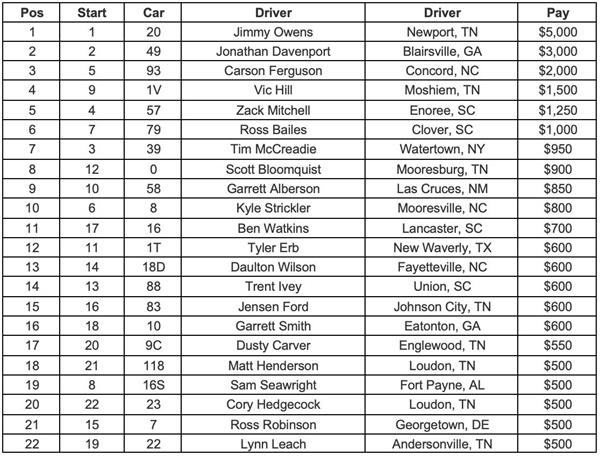